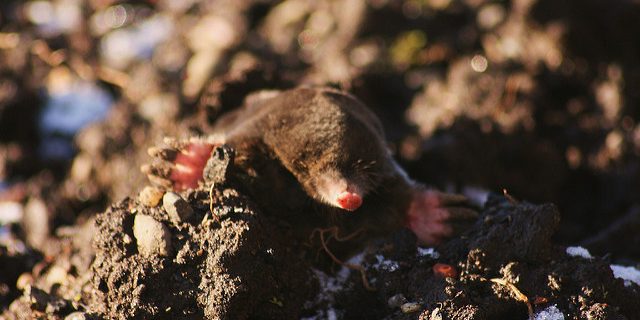 You may have spotted the signs of moles in your garden; those small heaps of soil spread in lines across your lawn or borders or sunken areas of lawn are a clear indication that these burrowing creatures are around.

Moles can live in suburban areas of towns near to woodland or wild land, and in Oxfordshire they most commonly seen in gardens in areas like Boar’s Hill. Moles love to dig through free-draining, soft soil that’s got plenty of juicy worms for them to munch. Of course, this is exactly the kind of soil gardeners like too, but unfortunately moles and gardeners don’t mix well!

Moles are a symbol of the English countryside, much-loved characters in many children’s books, but for the gardener, moles can be a pest and hard to get rid of. Their digging can ruin lawns, destroy plants and interfere with borders; although moles don’t directly eat plants (they live on earthworms and insects), their digging interferes with root systems, harming plants. Their mounds of excavated soil on a lawn can be unsightly and must be flattened before mowing, and mole tunnels under a lawn can also cave in, creating an uneven surface.

But getting rid of moles in your garden can be tough. We look at some of the best solutions to try if you spot those mole signs.

Both types of trap have their drawbacks though; they both take careful setting up, involving digging into a molehill to find the tunnel direction and placing the trap into the tunnel. Soil can clog traps as the mole digs, setting them off early so they need resetting. There is also a risk that traps don’t work as humanely as intended; moles are sometimes not killed outright, or may die of starvation or panic in a live trap if it isn’t checked regularly. If you capture a mole in a live trap, you also have responsibilities when it comes to disposing of the animal – you must have permission to release it on someone else’s land, and that land must be suitable to support moles.

Call in the professionals
One option is to pay a professional mole catcher to come in and deal with your mole problem. They are experienced at setting traps effectively, and are likely to deal with the issue faster than you can. But any trapping method has the disadvantage that it doesn’t permanently get rid of moles – empty tunnels can be re-inhabited by new moles, and if your soil is particularly mole-friendly, more are likely to move in.

Planting solutions
There are natural anti-mole techniques that some gardeners swear by that are supposed to discourage moles from your garden altogether. Planting is one of them; some of the species that moles are meant to dislike include alliums, marigolds and daffodils, whose scent is meant to be effective for three months after flowering. To plant these anti-mole varieties, you much first identify the boundaries of the land you want to protect and plant at points around that area.

An organic solution: pet hair
Another organic, mole-friendly solution is to spread cat or dog hair over the boundary of the area affected. Moles apparently hate the smell of the hair because both animals are predators, and will move elsewhere to avoid it.

Muntjac Deer in Oxfordshire: A Problem for Gardeners?
11th April 2016